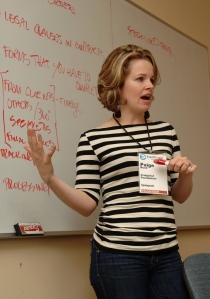 Paige Buck (@paigeali) asked participants to discuss processes that “eat up time” for event planners. Participants listed items under the general category of information flow and tracking, such as an easier way to address banquet event orders (BEOs), or food orders, streamlining repetitive actions such as standard clauses in contracts and exhibitor forms, and receiving items like speaker lists and invoices in a timely way.

The group discussed time-consuming post-event items such as final invoices from suppliers, thank you notes, and evaluation forms. Discussing the issues event planners have with suppliers, a participant noted that some suppliers can take an extraordinarily long time to submit invoices.

Buck suggested adding a clause in the contract, stating that if an invoice is not sent within a certain time, the supplier will be paid less. One participant said that she included a clause in one of her contracts with a hotel; if she submits her invoice within 15 days instead of 30 days, the hotel will give 5% off her bill. Another participant suggested using Freshbooks to generate online invoices. When invoices are due, an automatic reminder email is sent to the client. The participant noted that freelancers who use this tool get paid two weeks earlier.

Buck said planners must determine who is holding up the invoice. Participants discussed setting expectations before the event, noting that event planners must ensure that contracts, such as the BEOs, are fulfilled and that the event planner is receiving what was outlined in the agreement. If this does not happen, then the supplier should be financially penalized.

A participant who is a supplier noted that there is a “dark side” to getting an invoice submitted. In his company, he needs to send the draft invoice to the director of sales and other senior managers before he gets budget approval to pay the invoice. At the same time, he also sends a draft copy to the event planner so he or she will know that the invoice is being processed and will be sent soon. An event planner agreed this was a great idea and probably helped build a stronger client relationship. She asked another supplier, “Why do suppliers get back to event planners in a timely fashion?” The supplier responded, “I build a relationship with event planners so you know you can depend on me.”

The importance of building a relationship with clients may also help future business, Buck noted. “Clients may come to an event planner for a 20-person meeting, but in their back pocket, they may be looking to source a 1,000-person meeting,” one participant said. Another said that to keep abreast of upcoming events, it can be helpful to join event committees to “help drive the process.”

No matter how prepared an event planner is before an event, issues will always arise—and they can snowball into larger issues, a participant noted. “Presenters go ‘radio-silent’ or make changes to their presentations at the last minute and then are upset because there are no handouts at the event.”

Buck asked the group whether event planners have time to step away from the day-to-day activities and look at the overall big picture and evaluate how things are going. One participant said her company had just completed 15 trade shows in four months. While they have put processes and templates in place, they are looking at ways to streamline activities. “The difficulty is,” she said, “there are items that need to be fixed for the next time but [the event planner] is too burnt out to think about it, so the issues might be repeated at a future event.”

Another participant said, “It’s also an issue for clients. When I ask my client for feedback about how things went at an event, my client is more interested in talking about the next event than in discussing issues that have just occurred.”

Buck asked the event planners what tools they love using. A representative from StarCite described an in-house tool that generates budget spreadsheets. Another participant asked if there is a product that she can buy to do this; Buck suggested using CVent. A participant said she liked some parts of CVent, such as developing requests for payment or sourcing; however, she was less impressed with the tool’s ability to track budgets.

Buck mentioned Eventbrite, which she described as easy to learn and navigate. Another person talked about Basecamp, a project management tool that is “great for discrete projects but not as good for event planning, because you are not able to look at all milestones or timelines in one place.”

The group discussed the issue of feedback. “How do you get attendees to respond to how an event went?” a participant asked. Buck suggested surveys through StarCite instead of Survey Monkey, but remarked that “by the time someone gets to the survey, it’s closed.”

Another participant suggested collecting surveys onsite at the event. “Hand out questions that the participants can answer during the speaker’s talk,” he said. “Whoever answers the questions correctly receives a prize.” He described an event he had planned in Florida, where he rented iPads to conduct surveys. “It was the coolness of a new technology that drew the survey takers in.” He also pointed out that this cuts down the use of paper and can give the event planner a real-time response.